Dear Dr. James: Could a certain amount of pedophilic interest simply be normal for men?

This question was left as an anonymous comment for last week’s entry, Will there ever be a cure for pedophilia?  But because I receive this question so frequently, thought I'd put it here as it’s own entry...


Dear Dr. James: Could a certain amount of pedophilic interest simply be normal for men?

Men in prehistoric times who chased after say 9 year old girls would have left behind more descendants than men who chased after 30 year old women for the simple reason that a 9 year old has many more fertile years remaining. When men in primitive societies raid and abduct females from other tribes the most highly prized are the young virgin teens and preteens for the same reason. Essentially what's happening is that men are stealing eggs off other tribes and the females with the most eggs in their ovaries are the young virgins who haven't started reproducing yet.

That comment really has two parts. The first part is a straight-forward question with a straight-forward answer: Yes, typical men do indeed show a certain (very small) amount of response to children—this has been shown repeatedly again in the lab (Blanchard et al., 2009, figures shown below). That pattern of arousal does not indicate being a pedophile, however. Although typical men sometimes respond (a bit) to children, they respond more to older persons, and the most (by far) to adults. That is, typical men strongly prefer adults over children, even if some have some non-zero level of response to children. 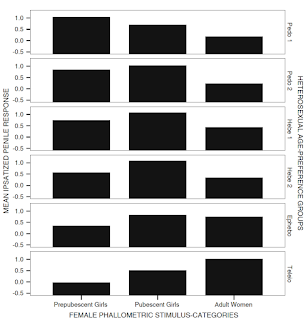 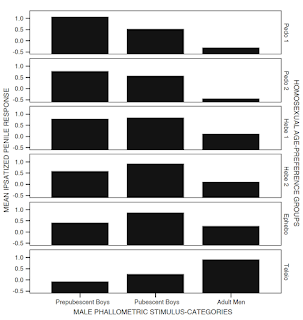 The second part is an idea I have heard before, but I am afraid it is based on some false information: Fertility does not start at the beginning of puberty. Indeed, fertility does not start even when menstruation starts (another common misconception). The menstrual cycle begins at an average age of 12.3 to 12.9 (Euling et al., 2008; Finer & Philbin, 2014; Herman-Giddens et al., 1997), whereas a woman’s ovaries don’t start releasing eggs until roughly three years later, on average (Apter, 1980; Metcalf et al., 1983). Although we do occasionally see instances in the media of very young girls becoming pregnant, these are, of course, the exception. Hormone studies show that human fertility starts at the low point of puberty, increasing to peak during the 20s, and decreasing again over the 30s (Ellison, Panter-Brick, Lipson, & O’Rourke, 1993).

Also arguing against the “kidnap them as girls to get all their subsequent offspring” idea is that it forgets that pedophilia is the preference for children. When such girls become adults and able to bear children, they are no longer attractive to the pedophile. Even though the now-adult could conceive children, the pedophile is more attracted to the girls who cannot. So, once again, the greater the pedophilia, the lesser the chance of successful reproduction.